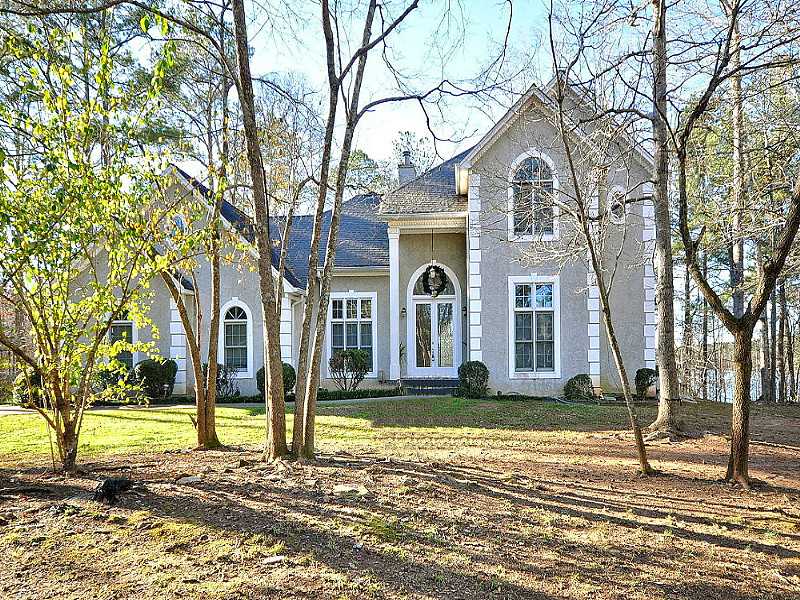 618 S. Alexander Creek Road is one of the few homes in the area that as a boat slips, and is only steps away from the lake. This close proximity to the lake makes it effortless to enjoy many family friendly activities, such as canoeing, picnicking along the lake, and jet skiing.

Newnan is a city in Coweta County, Georgia, about 30 miles southwest of Atlanta. The population was 16,242 at the 2000 Census. Newnan is one of the fastest growing cities in Georgia.

As Newnan’s only truly private country club, Newnan Country Club serves an impressive roster of high-powered members; including many of the area’s most successful and well-known individuals, including captains of industry, professionals and executives, politicians and entrepreneurs. Newnan Country Club is the perfect place for your family to forge lasting friendships, or for you to network and develop advantageous business relationships.

The 18-hole “Newnan” course at the Newnan Country Club facility in Newnan,
Georgia features 6,966 yards of golf from the longest tees for a par of 72 . The
course rating is 73.6 and it has a slope rating of 133 on Bermuda grass.
Designed by Denis Griffiths, ASGCA, the Newnan golf course opened in 1919. Louis
McHughes manages the course as the General Manager/Golf Professional.

Just a quick 10 minute drive away is the beautiful Ashley Park outdoor mall. Ashley Park Mall is the Destination for holiday Shopping and Entertainment. There are many amazing restaurants, as well as Belks and Dillard’s department stores. Please click on the link below for a list of stores located at Ashley Park Mall.

Newnan, GA has a vast array of community parks, perfect for biking, swimming, team sports, and golfing. The parks include”

Temple Avenue Park – A 2.5 acre passive community recreational park located within the historic Temple Avenue residential district. The site is the former location of Newnan High School and Temple Avenue Elementary School. The park is bound on the west side by the Male Academy Museum. Temple Park contains a small gazebo that is often reserved for weddings and a large triangular water fountain is located in the middle of the park.

Cranford Park – A .70 acre passive neighborhood recreational park located along Jackson Street, about a half mile north of Highway 34. The park sits snuggly within a residential district and backs up to the City’s historic Oak Hill Cemetery. The rectangular park contains meandering brick and concrete walkways, spotted with benches that traverse the heavily landscaped park.

C. J. Smith Park – A 12 acre active community park located along Farmer Street. The park is actually divided in half into two distinct sections separated by a steep wooded bank. The lower half of the park contains the park’s major draw, which is an adult size softball field, which is home to Coweta County sponsored adult softball leagues in both the spring and fall months. The park contains a paved 27 space parking lot, rest rooms, spectator bleachers, and miscellaneous playground equipment. Several picnic tables, as well as grills, are also available for gatherings. The upper half of the park is the home of the Coweta County African American Heritage Museum and Research Center.

Newnan’s six historic districts, all on the national register, contain some of Georgia’s most beautiful houses and commercial buildings. The houses are represented by the antebellum and Victorian styles that dominated Newnan’s early and mid-19th century development. Buildings that make up the Central Business District comprise several architectural styles, including Neoclassical, Italianate, Classical Revival, Romanesque, and Victorian.

Cole Town – Named for R.D. Cole Company, this historic district is an example of a residential neighborhood which developed around a major industry. Founded in 1854, the R.D. Cole Company produced a wide variety of architectural woodwork, trusses, industrial machinery, and water towers that are still known worldwide. The company’s woodwork distinguishes the district’s residential architecture. Also in the district is a representation of the experimental approach to concrete and reinforced concrete bridges in the early twentieth century.

College-Temple – Even though this district was laid out in 1828, it remains an example of a well-planned neighborhood with schools, parks, tree-line streets and churches. Walkways, fences, formal gardens, and open lawns with hedges accent the wide range of architectural styles in this 100 plus acre district. Land Lot #58 on the corner of College and Temple was designated the “academy” lot and was the site of seven schools from 1829-1975. The Male Academy, which prepared the young men of Newnan for college, serves as a museum today. The museum has received recognition for the extensive collection of antique clothing and also includes a large display of Civil War artifacts.

Downtown – Laid out in 1828, the nine square block district is an example of the Washington-type plan in Georgia, which includes wide avenues and a public square. The Square is anchored by the present Neo-Greek Revival courthouse, which was built in 1904. The dome, which rises more than 100 feet above the square, was fitted for a four-face clock that was originally hand wound but was converted to electric in the mid 1900’s. The former Carnegie Library, the first Carnegie-endowed library in Georgia, is within this district, as well as four religious structures that represent the religious presence in central business districts. The historic black commercial section along East Broad Street is a rare survivor of the once common segregation of black and white commercial areas. Combined, the district tells the story of Newnan’s rich commercial history in the early 19th Century.

Greenville-LaGrange – A 61 acre residential neighborhood along two major highways, this district developed over 100 years and is in contrast to the planned layouts. This is a patterned development, in which the oldest principal streets are lined with the oldest and grandest houses, and the later infill streets are lined with the newer and smaller houses. Many of the larger, grander houses were home to many of Newnan’s prominent citizens. The district Civil War ties are represented in the antebellum house known as Buena Vista, which served as Confederate headquarters during the Battle of Brown’s Mill in July 1864.

Newnan Cotton Mill and Mill Village – Newnan latest site on the National Register was listed in April 2002. The Newnan Cotton Mill was established in 1888 along the A & WP (now CSX) Railroad on East Washington Street. The Mill Village sprung up in the surrounding area, bordered by the railroad on the west, Washington Street on the south, Wilcoxen Street on the north, and Farmer Street on the east. The area is still a fine example of early 20th century Georgia mill villages, while the mill itself now serves as the home of an upscale loft apartment complex.

Platinum Point – As the name indicates, this 43 acres district is a collection of fine houses built by wealthy Newnan citizens. Developed just north of town along a major highway, Platinum Point emerged with the increased use of automobiles. The automobile influence is evident by the many out-buildings used mostly as car garages. The earliest building in the district is the 1895 Queen Anne style house with asymmetrical massing and wraparound porch. Built in a park-like atmosphere, the district presents an excellent and diverse variety of Revival Style architecture popular in the early 20th century.

Newnan is a shopping hub and has experienced rapid commercial development. One of the new developments is Ashley Park, an open-air shopping mall near I-85, anchored by Dillard’s, and Belk department stores along with a large movie theater and dozens of other well-known retailers and restaurants.

Television and Movies in Newnan, GA

Newnan has been the home to many movies and television shows ranging from the ABC series “October Road”, the TV Movie “Murder in Coweta County”, the NBC series “I’ll Fly Away (from 1991-1993), the movie “Fluke”, portions of the film “Fried Green Tomatoes”, the movie “Zombieland”, and portions of the Lifetime series “Drop Dead Diva”.