12th & Midtown is changing the face of Atlanta 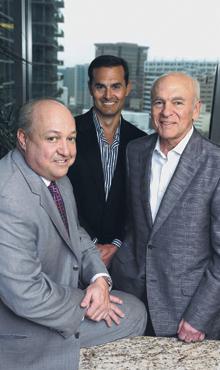 Atlanta developers Daniel Corp. and Selig Enterprises Inc. are assembling land to expand their 12th & Midtown project with more retail and apartments. In the past few months, Daniel and Selig have put about an additional 4 acres under control within a five-block radius of 12th & Midtown, including tracts along Peachtree Street, West Peachtree Street and Crescent Avenue. They have also put offers on additional parcels around the heart of their development. They did not disclose any projected sales prices, because they are still in final negotiations.

It’s the biggest assemblage of new parcels for the 12th & Midtown development team since 2008.

The project is surrounded by some of the most sought-after properties along Peachtree Street, where land prices are still going for between $3 million and $4 million an acre.

New construction on some of the parcels could start by the end of the year, but more likely in early 2014, the developers said. Office remains part of the project’s master plan, but the first new development in the next phase would probably take the form of apartment towers or retail. That would further establish urban infill sites as the biggest draw for most new development.

Atlanta has continued to see a marked slowdown in new commercial real estate construction, except for high-end apartments.Daniel and Selig, two well-known development companies, say the new momentum of 12th & Midtown validates its resilience since they launched the $1.1 billion, 2.5 million-square-foot project at the height of the market in 2006.

It’s backed by capital partners including Canyon-Johnson Urban Fund L.P. and MetLife Real Estate Investments. “I think we’re helping change the face of Midtown and, by that, the face of Atlanta,” said Selig Enterprises President Steve Selig. The expansion comes as work continues on the latest phase of 12th & Midtown, the 23-story 77 12th street apartment tower. The newly assembled sites could give rise to more residential construction.

The 77 12th Street tower is on schedule to wrap up in May. There’s an urgency to complete the tower, as the pipeline for new in-town luxury projects continues to grow.

Competing developer Jim Borders’ Novare Group already has more than 100 commitments for its 320-unit SkyHouse Midtown apartment project, where monthly rents are approaching more than $2 per square foot, or more than $1,500 for some 700-square-foot units.

Daniel and Selig have about 40 commitments for 77 12th Street four months before its targeted completion. Such demand at high rental rates has been drawing institutional investors to the intown Atlanta apartment market, including Northwestern Mutual Life Insurance Co., a partner in developing 77 12th Street.

Novare plans to break ground on another Midtown apartment tower this month at 100 Sixth Street. Several other projects are either under way or could be announced this year.

“Residential is the favorite child right now,” said Steve Baile, a senior vice president with Daniel Corp. Retail is another focus of 12th & Midtown’s next phase. That’s going to be surprising to some retail experts. The weak economy hit retail as hard as any other real estate development sector, and big intown projects including the former Buckhead Atlanta were forced to shut down.

Daniel and Selig are confident, however, that Midtown’s population growth will continue driving retail demand. Selig’s Shirley Gouffon has been marketing Midtown to retailers around the country.

That’s an easier job than it was in previous decades. It was just 20 years ago that Midtown was dominated by the One Atlantic Center building; what was then called Nations Bank tower (today Bank of America Plaza); and an unsightly collection of surface parking lots and dilapidated buildings. Much as changed since then.

Daniel and Selig’s 12th & Midtown has been the biggest catalyst for the Midtown Mile, an ambition to create an outdoor shopping destination that could one day make Peachtree echo Chicago’s Magnificent Mile.

Over the past six years, Gouffon has helped lure the swanky steakhouse STK out of New York City to 12th & Midtown; CB2, the more affordable version of Crate & Barrel; and Exhale Spa, one of the most popular high-end spa concepts in the country. Exhale has grown to 900 members since 2010 when it announced it would open at 12th & Midtown.

“Midtown has a name for itself,” Gouffon said. “Atlanta was always a mall city. But, Midtown has changed that perception with street-level retail. We have a story now. And, we’re still selling that vision.”