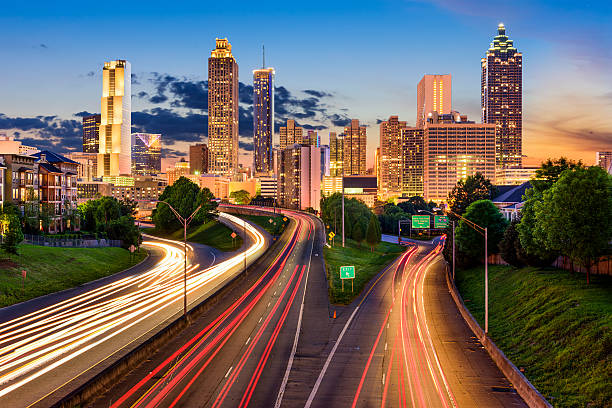 ATL, the A, Hotlanta, no matter what people call it there is only one Atlanta, Georgia. This city has a diverse population and multiple sports teams while still holding on to its Southern charm. There are plenty of things to do such as shopping and fine dining. The city is also home to several Fortune 500 companies, was recently rated one of the best cities for a start-up business. For those interested in making the big move, there are just a few things to know:

While the nickname “Hotlanta” comes from the humid summers, Atlanta’s weather is on the mild side. It has four distinct seasons and rain year-round. Summers are hot, with high temperatures usually around 90 degrees. Winters are around 40 degrees, and snowfall is not a common occurrence. Atlanta is often described as a “City in a Forest” for the many trees in the area. The city has one of the highest amounts of trees in a major city, and National Geographic once called it a “Place of a Lifetime.”

Most people in Atlanta get around with cars, which can lead to heavy traffic during peak rush hour times. However, the city does have a public transportation system called MARTA. The Metropolitan Atlanta Rapid Transit Authority is a system of bus routes and a light rail line for $2.50 one-way. The city is becoming more bicycle-friendly every year. Last year, Atlanta launched its first bike-share system called Relay, which recently expanded this year by adding 400 more bikes. Using Relay allows you to rent a bike from one location, travel to your destination and return the bike to station closest from there.

One aspect of the city that confuses a lot of newcomers is the fact that several street names and businesses are named Peachtree. It makes sense considering the city is in “The Peach State.” Still, it is worth it to double or triple check addresses to make sure the navigation isn’t going toward West Peachtree when it should be heading to East Peachtree.

Atlanta is split into hundreds of smaller neighborhoods. Some of the most popular areas are Midtown, Buckhead, Old Fourth Ward and Little Five Points. Midtown is the city’s second largest business district and it is located next to the beautiful Piedmont Park. The area has a healthy arts scene and is home to the High Museum of Art. It also has a variety of dining options and a thriving nightlife. Buckhead is a stylish district sometimes referred to as the Beverly Hills of Atlanta. There are several independent art galleries in the area, and young professionals often head to Buckhead for its evening nightlife.

Old Fourth Ward is a historic part of Atlanta, once home to Dr. Martin Luther King Jr. This neighborhood has a variety of hip eating spots that were once former warehouses. There are also several parks nearby, such as Fourth Ward Park, which has a skate park inside. Little Five Points is definitely Atlanta’s hipster haven. The area has dive bars, record stores, thrift clothing, ethnic shops and a live music venue that supports local acts.

Atlantans take their sport teams very seriously and all sports lovers will be happy to know Atlanta houses several major teams. Both the Atlanta Braves and the Atlanta Falcons came home to new stadiums this year. Residents can try to catch home runs at the Braves’ SunTrust Park or cheer on the Falcons as they score a touchdown at the Mercedes Benz Stadium. Both stadiums are state-of-the-art and are sure to amaze. Soccer fans should check out the city’s newest team, Atlanta United. They share their stadium with the Falcons, and their first game broke Major League Soccer attendance records at 70,425 fans.

The city’s diversity has led to a rich food scene that appears in the form of food trucks, casual restaurants and dining with celebrity chefs. Buford Highway, on the north side of the city, is a great place to start. Some must-try restaurants include Dim Sum at Canton House; for late night eats, El Rey del Taco and for creative sushi dishes, Sushi House Hayakawa. The Buckhead neighborhood is known as steak central. Recommendations include Bones and The Palm. Of course, there are plenty of tasty options for soul food. Head to Wyatt’s Country BBQ for sweet, smoky ribs or K&K Soul Food for classic mac and cheese.

Back in 2011, Atlanta deemed itself the zombie capital of America. No, there aren’t any undead walking around. But the city was the filming location for both “The Walking Dead” and “Zombieland.” People can check both locations out during the Big Zombie Tour. The city also hosts several zombie-related festivals and events, including the Walker Stalker zombie convention.

Outdoor lovers should check out the Atlanta BeltLine. Once a former railroad area, the BeltLine is now a series of trails for both walking and biking. The area is still a work in progress, but visitors can check out art exhibits, walk-up patios for dining and picture perfect views of the city skyline. Located downtown, Centennial Park has something to offer for the whole family. The park was created as a part of the 1996 Summer Olympics held in the city. Now it hosts concerts in the summer, Independence Day fireworks and the Fountain of Rings, a popular attraction in the summertime.

No matter what your interests are, there’s surely something for you in Atlanta. From food, sports, and a variety of outdoor activities, you’ll never have trouble finding something to do. Atlanta is the perfect place for anyone to call home.